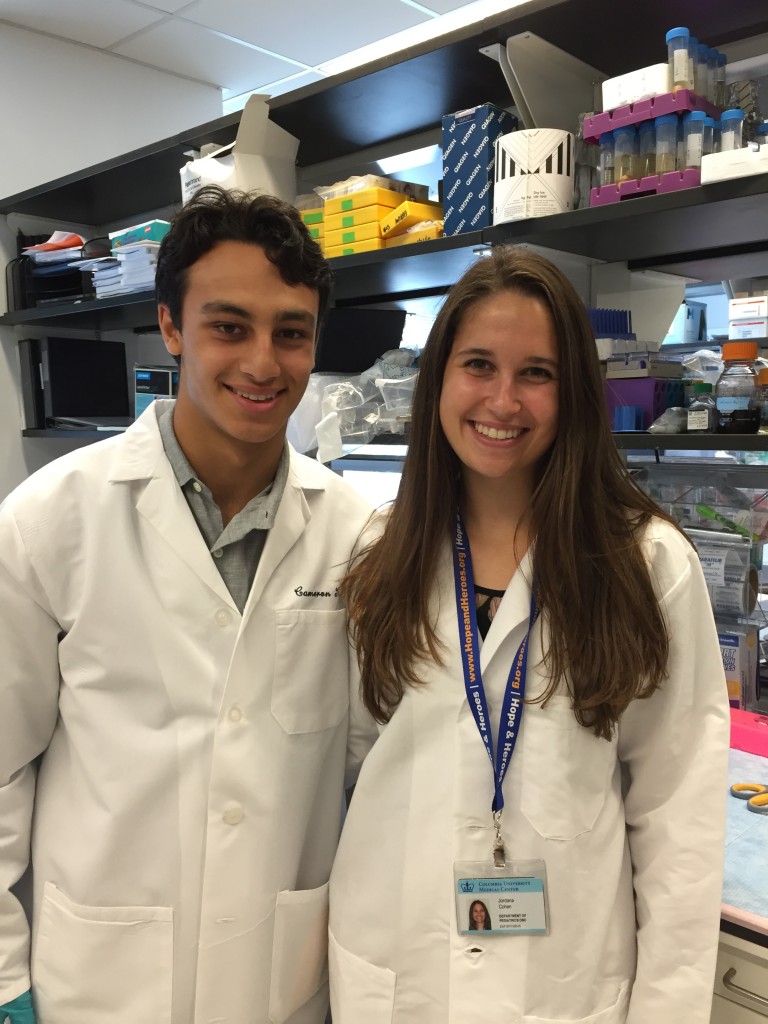 This past summer there were two young lab assistants in Dr. Andrew Kung’s lab: Avery Hoffman and Jordana Cohen. Avery is a survivor of Non-Hodgkin lymphoma – and the Youth Chair of the Hope & Heroes Walk – who had some trepidation about returning to the hospital. Jordana is a longtime  supporter of childhood cancer. She has held fundraising events (like the recent Mud Run), collected in-kind donations for patients, and is interested in scientific research. Read below about their summer experiences working on childhood cancer research.

I recently broke a promise. Six years ago, I swore to myself that I would never voluntarily go back to the hospital where I was treated for Non-Hodgkin Lymphoma. It’s not that the doctors and nurses weren’t terrific – they were. But the pain and smell of chemotherapy drugs, spinal injections and bone marrow samples were nothing that I wanted to remember. But in the end, I am thrilled that I reneged on my vow and returned to Columbia University Medical Center as a summer intern in pediatric cancer research.

I worked alongside Dr. Filemon Dela Cruz who showed me the latest in cutting edge cancer research called Precision Medicine. The doctors explained that this kind of research would be the future of the treatment of not only cancer, but all diseases, and I got a front row seat to watch how it was done. As a cancer survivor nothing could have been more thrilling. I was captivated as the doctors harvested tumors from children at the hospital for study. I helped in studies which sequenced the DNA from kids’ cancer cells so the doctors could understand the genetic makeup of the specific cancer. I stood by as the team introduced those same cancerous cells into mice which they later harvested as tumors. It was fascinating to actually see how the staff tests new therapies on the mice to see what will work on the children – taking so much of the guesswork out of the process.

Although I am sure that breaking a promise will never be the right thing to do – I am so happy I broke this one. I left my internship with a sense of pride in watching what the heroic doctors of Columbia University Medical Center are doing on the forefront of cancer research technology. I can’t help but hope that these new techniques will save so many future lives.

For two summers now, I have worked in the Andrew Kung Lab with many professionals. Last summer I had the opportunity to work under the leadership of Sarah Tannenbaum, a post-fellow. This summer, I have had the great opportunity to work with renowned doctor, Filemon Dela Cruz.

For both summers I have worked on a portion of an exciting case study and have been able to perform experiments such as Western blots and RT-PCR. This research is focused on the identification of a novel chromosomal translocation that has been hypothesized to be responsible for the malignant phenotype of cells in a fibrosarcoma case. The project is promising and I am very happy to be working on parts of it. Although I have been working on the same project, these past two summers have been very different. I feel as though this summer I have had more independence to do experiments and engage in other aspects of research.

Also, this summer I have been able to share my experience with other kids in the lab, including cancer survivor Avery Hoffman. I think it’s really amazing that I was able to work alongside with him this summer. Not many people are able to do what he did and not many people can claim that they have had this opportunity. All I can say is that I am really lucky to have had the chance to work with him and am excited to do the same next summer.

Every day, after work, when I walk in the door my dad asks, “Have you found the cure yet?” What he hasn’t realized, and I hadn’t realized before, is the true intricacy of this science. After working in the lab, I have realized how complicated research is and the reality associated with discovery. Physicians and scientists are working meticulously and very hard to, as Dr. Kung always says, “Do our best for the kids of today, and do better for the kids of the future.” There is infinite hope and so much more to be explored and understood. Although there are many complications, the findings are boundless and the possibilities are endless.